Dwight Wakabayashi has written for the following sites: 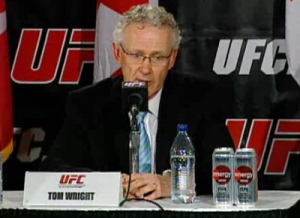 Anyone out there ever get grounded or have something they love taken away from them because of bad behaviour? My parents used that one early and often in my mischievous childhood and I can’t help but think that the UFC is playing Daddy on Canada right now.

It is no secret now that UFC 178, originally scheduled for Toronto on September 27th has been pulled off the table and committed to Las Vegas. Journalists and MMA media members close to the know have all contacted their sources and gotten some very stock answers from inside UFC Canada as seen in this column by friend and Toronto Sun sports columnist Steve Buffery, as well as this solid piece from radio personality and friend Carlin Bardsley. Beezer calls it a slap in the face and Bardsley says, the UFC has turned their backs on Canada.

The completely inadequate and “line” answers given to the media make absolutely no sense. I call BS on the “fluidity of the UFC schedule” answer given by Director of Canadian operations Tom Wright. He stood up on a podium in January and announced the show dates outright, waving flags and pompoms about how Toronto and Montreal will be annual fixtures on the UFC tour, and speaking about how the UFC has never been stronger in Canada. You don’t do that and then pull the show off the map without fans wondering what’s up. Dana White simply says Vegas and the venue wanted it more. They just wanted this fight more than Toronto. Really? I didn’t really know that the show was in a venue bidding war, when it had already been announced for Toronto by the top brass. That smells of greed and disloyalty and has pissed off a very loyal fan base that is starving for MMA shows.

Canada is not the be all and end all for the UFC, but we do deserve a true and satisfactory answer as to why this event, and subsequently the pre-announced December show in Montreal are currently off the table. Just tell us like it is Tom and Dana, We can handle it.

I hate speculation. I like to contact and talk to the people in the know and have made those efforts but all my sources (who are more in the know than I am) are getting the same stock answers. Beezer and Bards explained that it may be because of recent complaining about the fights that we get on our cards. Fans in Vancouver complained about Mighty Mouse Demetrious Johnson in the main event and the show did very poorly at the gate and in PPV buys.

When Jones-Gustafsson II was announced as the headline fight for Toronto in September fans bristled and snarled at the fact that Jones was going to be the headliner again. I was dumbfounded. Jones is MMA;s modern day Ali (Jones haters don’t threaten me) and any chance to see him is a blessing. Toronto has become the home cage for the man and we should all embrace that. Instead we complained. Could we really blame the UFC for pulling that fight and the card? I really couldn’t but at least tell us that our bitching and complaining is the reason why we are grounded.

In my humble opinion based on nothing but personal gut feeling, and here we go with the speculation, is that there are two or three major factors at play as to why this event got pulled.

Number one would be the negotiations between UFC Canada and the ACC. They obviously did not go well and my hunch is that it became a pissing match of conditions that Tom Wright could not nail down to the UFC’s liking. That happens. No issue. Just tell us flat out.

Number two is the underlying fact that the UFC’s Canadian rights are coming up soon and there may be a negotiation going on behind the scenes that has effected the timing of this show.

Number three revolves around the relationship with the UFC and Wright himself. I have absolutely no basis for this with the exception of Dana White’s tone and demeanor when speaking on Canadian affairs, but I am not sure the powers are entirely happy with the Canadian ops boss. Pure speculation, but I am sitting here trying to figure out why the cards have been pulled and no good answers have been given.

In the meantime, Canada has been grounded by the UFC.

Father of one and Freelance Writer/Reporter who has covered MMA for over 12 years. I have an extensive background in studying mixed martial arts and am a print journalism graduate. I also write stories of inspiration and the fighting spirit. Have studied Bruce Lee and Jeet Kune Do from an early age and am a Lee historian. Have covered mixed martial arts at every level from youth jiu-jitsu right up to being fully credentialed by the major organizations like the UFC, Bellator, WSOF, MFC and Score Fighting Series. View all posts by wakafightermma