After battling Mother Nature for the first two months of the season, the Japanese Canadian Baseball League is finally in the swing of things in their monumental 50th season.

The combination of cold and thunderstorms from the beginning of May caused many of the first weeks of the season to be washed out and created an imbalance on league standings. Some teams sat at five games played, while others sat at two heading into last week’s schedule. The league and teams have tried hard to in the last few weeks to reschedule and make up some of the gaps created and there are only a couple of teams left to catch up.

Here are the JCBL standings as of  today, June 23rd;

Whales – The Whales have jumped quickly out of the gate and are the surprise front-runner in this 50th season. They are a veteran baseball team who has had the best pitching in the JCBL so far. They posted back-to-back shutouts last weekend in a doubleheader, taking out Asahi 5-0 in the first game and then the Tigers 2-0 in the second. They are hitting and scoring as well with 22 runs scored so far but the key is that they have only allowed a total of 5 runs against. I do expect the Whales to come down to earth a bit in the following weeks.

Warriors – The Warriors are a perennial contender in the JCBL and they currently sit in 2nd place after six games. The Warriors are a whopping +30 in run differential with a league leading 36 runs scored and a paltry 6 runs against. In my opinion, this is the team to beat in the JCBL every single year. They have the most left-handed batters in the league and have a lot of power in their offense.

The Warriors pounded the Giants last week with a dominant 12-1 win.

Tanino – Another offensive powerhouse, Tanino has a nice mix of veteran and young players and have put up 32 runs on the board, good for the second spot in offence just behind the Warriors. Tanino has not been as good on the mound or on defence and have allowed 18 runs against, a lot more than the two teams above them in the standings. Tanino are constant over achievers in the JCBL as they always seem to finish higher than expected in the playoffs. They will have to big bop their way to the title, but it has been very successful for them in the past.

Bean Sprouts – The Bean Sprouts have started the season with very solid play on both sides of the field as they have 3 wins and 2 losses and a +1 run differential. They have not scored with the likes of the top teams in the league with only 16 runs scored, however, they have only allowed 15 runs as well. This team is built on solid pitching and defence but will have to pick up the offence to stay in the top four of the league. The best small ball team in the league.

Tigers – The Tigers sit tied for 4th with the Bean Sprouts so far and are the final team in the league that can boast a winning record. They started the season with a surprising three wins in a row before suffering back-to-back shutout losses in a double-header last week.  The tough week leaves them with 11 runs for and 16 against for a -5 run differential. With their offence being scarce, I see the Tigers dropping in the standings in the next few weeks.

Asahi – 29 runs scored and 36 against and what you see is what you get with the veteran laden Asahi. Their roster is filled with experience and they come to outscore you or bust no matter who you are in the JCBL. Pitching, or lack thereof is always the achilles heal for Asahi, and they have allowed the most runs against in the league. You don’t have to be nervous in the batters box when playing Asahi, but you better be ready on defence because they can hit the ball with the best of them. 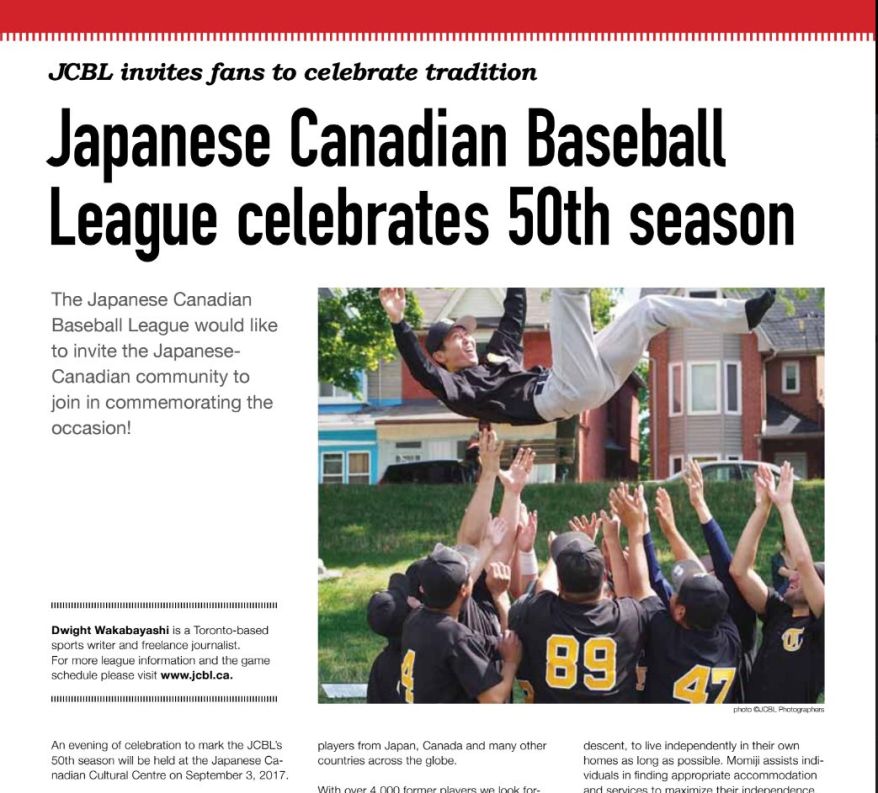 Taro’s Baseball Club – TBC has been one of the teams effected most by the bad weather and they have only played four games of the six on their schedule. They have scored the least amount of runs by any team in the league with only 8 but they have not given up many either with 13 against. TBC always boasts a nice selection of young Japanese players who come over each summer on exchange. I expect TBC to compete at the top of the standings for the entire season.

Team Sean – Team Sean is one of the new teams in the JCBL this year and they have gotten off to a bit of a rough initiation in the 11 team league. Team Sean is full of young players who are getting their first taste of men’s recreational baseball and they have had to adjust to the safety ball that the JCBL uses. They have only won one game so far and have a -16 run differential. I expect this team to get better and better as each week goes on.

Team Sean was dominated 12-1 by veteran team Tanino in their last game.

Giants – Another team that has been in the JCBL for almost it’s entire existence, the Giants are off to their usual slow start. Possibly the oldest team in the JCBL, the Giants are known for struggling in the regular season and peaking in the playoffs. They have been their own worst enemy with walks and errors this season, and hold a -17 run differential. They are hitting the ball better than previous years, however they are struggling to get the timely hit.

The Giants fell 12-1 to the Warriors last weekend.

Yusei Dragons – The Yusei Dragons are the other expansion team and have started out with one win in their first five games. The record may be a little bit deceiving for the Dragons as they have scored just as much as they have given up  and despite the losses hold only a -1 run differential. Like Team Sean, Yusei is slowly adjusting to the new league and I predict that their play and record will improve as the season goes on.

The Dragons lost a tight 4–3 game to TBC last weekend.

Maple Buffaloes – The Maple Buffaloes have been kicked around by Mother Nature more than any of the other teams as they have only played three games so far this year. Even a scheduled make-up game last Friday night against the Giants had to be cancelled again due to thunderstorms, leaving their game count at three. They are winless so far, with a -13 run differential, but it has been very tough to get in a groove with all the time in between games. The Maple Buffaloes will get better as they get some games consistently underway in their season.

All JCBL games are played on Sundays at Greenwood Park and Highview Park in Scarborough.